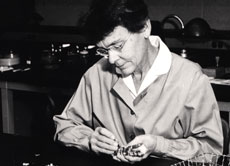 "If you know you are on the right track, if you have this inner knowledge, then nobody can turn you off ... no matter what they say." Barbara McClintock

Barbara McClintock was born in Hartford, Conn., and grew up in Brooklyn, N.Y.. She was the daughter of a doctor and, after developing a love of science in high school, she enrolled at Cornell University's College of Agriculture. McClintock took the only undergraduate-level genetics course offered and, as a junior, was invited by her genetics professor to take Cornell's only graduate-level course on the subject. McClintock became interested in cytogenetics--the study of the structure and function of chromosomes. She received her Ph.D. from Cornell in 1927 and, for over a decade, she pursued research there and at the University of Missouri (UM), focusing on the chromosomal makeup of maize. By examining the coloration of the kernels, she was able to trace genes through generations of corn plants.

McClintock became frustrated by the limited opportunities for women to advance professionally at UM. In 1941, she moved to the Cold Spring Harbor Laboratory on Long Island, N.Y., and joined the Carnegie Institution's Department of Genetics. At Cold Spring Harbor, McClintock's work on corn cytogenetics led to a significant discovery about the movement of genetic material along chromosomes. The finding, with implications for how genes control the growth and development of cells, was in conflict with the contemporary understanding of genetics. McClintock published her revolutionary data in 1953, but, after facing skepticism from the scientific community, she decided to stop presenting her findings. "I never felt the need nor the desire to defend my views," McClintock explained in 1983. "If I turned out to be wrong, I just forgot that I ever held such a view. It didn't matter."

In the late 1950s and early 1960s, McClintock traveled throughout South and Central America, using funding she had received from the National Science Foundation (NSF) and the Rockefeller Foundation to study different varieties of maize. During this period, she served as a mentor to young scientists interested in studying maize genetics. Colleagues who supported McClintock's work contacted her regularly with research questions and invited her to give guest lectures at universities around the United States.

By the early 1970s, innovations in molecular biology and genetic engineering began to confirm McClintock's earlier theories. These new findings sparked a renewed interest in, and appreciation for, her work. In addition to receiving the National Medal of Science from President Richard M. Nixon--the first woman honored with the medal--McClintock was the first recipient of a MacArthur Foundation grant and, in 1983, she became the first woman to win an unshared Nobel Prize.

McClintock continued to work at Cold Spring Harbor until her death in 1992. Her colleague, James Shapiro, a geneticist at the University of Chicago, called her "the most important figure there is in biology."