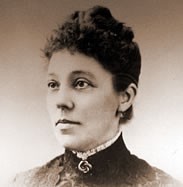 She began her career with Boston Telephone Dispatch at the age of 18 and continued working as a telephone operator until the 1910s. She was hired because the company discovered that the boys and young men who had been successful telegraphy operators did not have the right attitude or presentation for live phone connections.

Customer response to Nutt’s cultured, smooth voice was overwhelmingly positive, and so the male operators were phased out and more women were hired.

At one point in her career, Nutt even worked for Alexander Graham Bell, the inventor of the telephone, and was reputed to have every phone number in the New England Telephone Company’s directory.