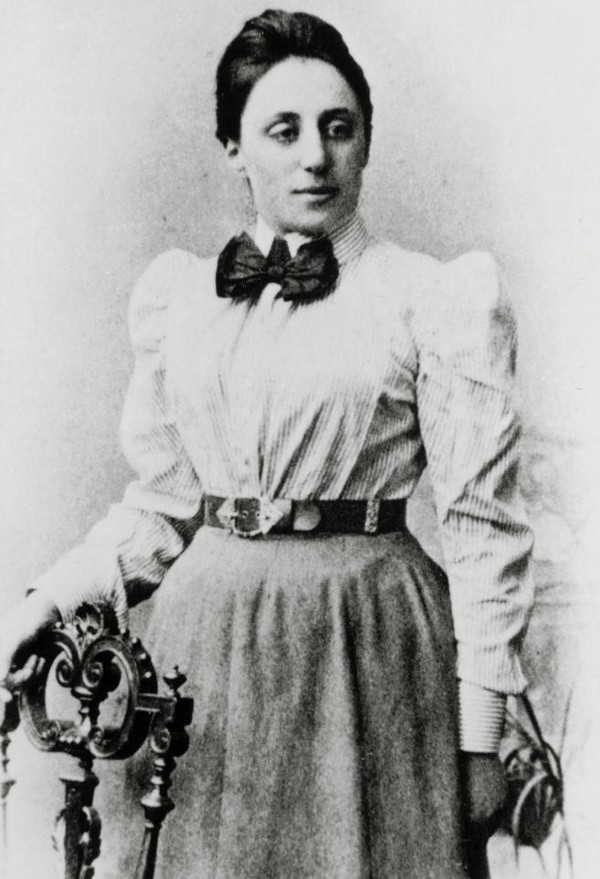 Emmy Noether was born in Bavaria in 1882. Despite attending finishing school and being certified to teach English and French, she found the mathematics her father and brother were doing at Erlangen University interested her more. Women weren’t allowed to enroll, so she aced the entrance exam and audited classes until Erlangen finally admitted women and she could get her PhD.

Noether went into research and more or less invented the field of abstract algebra. The core of the discipline is to examine the structure of mathematics and reduce it to its most abstract form. Noether’s goal was to find out how mathematical ideas relate to each other and construct general mathematical structures. She never claimed to be revolutionary, but her work was the foundation of a new approach to mathematics.

While Noether published ground-breaking papers at Erlangen, she had no title or salary; she was only able to occasionally cover for her father’s math lessons when he was sick.

After seven years of this, the mathematicians David Hilbert and Felix Klein invited her to work with them at Gottingen University. They wanted her to solve the confounding problem of energy conservation in Einstein’s theory of general relativity. In the course of figuring this out, Noether produced one of the most important insights in theoretical physics, which came to be known as Noether’s theorem.

Einstein described the theorem as a piece of “penetrating mathematical thinking”. Yet it can be stated quite simply: whenever there is a symmetry of nature, some fundamental quantity is conserved. Symmetry refers to when a physical process — or a mathematical description of one — stays the same when you change some aspect of the set-up.

For example, a perfect pendulum, swinging back and forth forever, is symmetric in time. Noether’s theorem, tells us that anything with time-translation symmetry conserves energy. So the pendulum loses no energy. Likewise, if a system has rotational symmetry, it works the same facing any direction and conserves angular momentum. This means that once an object is spinning, it will keep spinning. The stability we see in the orbits of the planets is a consequence of these symmetries working together: the conservation of both the energy and angular momentum of the bodies.

Noether’s theorem allows us to make deep connections between the results of experiments and the fundamental mathematical description of the physics governing them. Thinking about physics in this way formed the basis of the kind of theoretical leap that led physicists to theorise the Higgs boson long before it showed up in the Large Hadron Collider. Symmetry is so fundamental to physics that the standard model of particle physics is frequently referred to by its symmetry groups: U(1)×SU(2)×SU(3).

Revolutionising theoretical physics was well and good, but Noether was still working without pay, often teaching under Hilbert’s name, officially his “assistant”. In 1922, four years after publishing her theorem, she was named “associate professor without tenure” with a small salary. She lectured all around Europe.

Then the Nazis came. Noether was Jewish, and when the Nazis took power she was out of a job. Noether fled to America and became a visiting professor at Bryn Mawr College, also giving weekly lectures at Princeton. At Bryn Mawr, for the first time, she had female colleagues in mathematics. Tragically, she had only two years to enjoy this. Noether died in 1935 after complications from surgery when she was 53. Many of the great physicists and mathematicians of the day eulogised her, including Einstein.

In Noether’s time, the scientific establishment worked hard to keep women out. A genius of Noether’s calibre, with Einstein’s backing, could maybe be included. Even today, in mathematics or physics, we can observe an asymmetry in the treatment of women and men in academia.

And as Emmy Noether taught us, whenever a symmetry is broken, that means something is being lost.