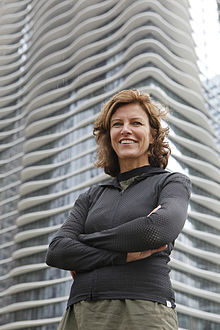 Jeanne Gang,  (born March 19, 1964, Belvidere, Illinois, U.S.), American architect known for her innovative responses to issues of environmental and ecological sustainability. She employed sustainable-design techniques—such as the use of recycled materials—to conserve resources, decrease urban sprawl, and increase biodiversity. She is perhaps best known for her. Aqua Tower, an 82-story mixed-use skyscraper in downtown Chicago that, when completed in 2010, was one of the tallest buildings in the world designed by a woman.

Gang earned a bachelor’s degree in architecture from the University of Illinois at Urbana-Champaign in 1986, and in 1989 she studied urban design—an interdisciplinary program combining landscape architecture, urban planning, architecture, and engineering—as a Rotary Foundation Ambassadorial scholar at the Swiss Federal Institute of Technology in Zürich. She earned a master’s degree in architecture in 1993 from Harvard University and was subsequently employed as a project architect and lead designer (1993–95) at Dutch architect Rem Koolhaas’s Office for Metropolitan Architecture (OMA) in Rotterdam, Netherlands. In 1997 she opened her own firm, Studio Gang Architects, in Chicago.

In 2004 architect James Loewenberg, whose firm developed the project, invited Gang to design Aqua Tower. The building’s curved concrete balcony overhangs, arguably its most notable feature, were designed to serve a dual purpose: they lend Aqua strong visual interest through their evocation of rippling water, and they diffuse strong winds, allowing balconies to be placed on every floor and all four sides of the building—a feat of skyscraper engineering. At the time of its completion, Aqua also had one of Chicago’s largest green roofs. Though that building quickly became Gang and her firm’s best-known project, the firm’s other projects were many and varied. Chiefly built in (but not limited to) Chicago, those projects ranged from private homes (Brick Weave House) and educational facilities (Columbia College Chicago Media Production Center) to exhibition spaces (Expo Chicago) and other outdoor structures (the Nature Boardwalk at Chicago’s Lincoln Park Zoo).

Gang’s firm participated in the Venice Biennale in 2004 and 2012 and received the Emporis Award in 2009 for the best new skyscraper of the year. In 2006 Gang received the Arts and Letters Award in Architecture from the American Academy of Arts and Letters, and she was awarded a MacArthur Foundation “genius grant” in 2011. In 2013 Studio Gang Architects received the Architecture Design Award—awarded to an individual or a firm for “exceptional exemplary work in public, commercial, or residential architectural design”—from Cooper-Hewitt, National Design Museum.

This profile originally appeared on Britannica.com.