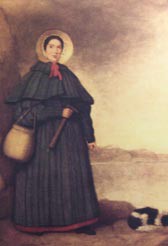 Mary Anning was a self-educated, working class woman from Lyme Regis and her contribution to geological science had a major impact at a time when there was little to challenge the biblical interpretation of the story of creation and of the flood. The spectacular marine reptiles that Mary unearthed shook the scientific community into looking at different explanations for changes in the natural world.

Mary’s discoveries were some of the most significant geological finds of all time. They provided evidence that was central to the development of new ideas about the history of the Earth. Her opinions were sought and she was acknowledged as an expert in many areas, including the rather unglamorous coprolites (fossil faeces). She also played a key role in informing the work of her learned, male contemporaries, notably William Buckland, Henry de la Beche and William Conybeare. By the time of her death, geology was firmly established as its own scientific discipline.

With her brother she found the first complete Ichthyosaur in 1810–1811 and over the years further sensational finds were made. New, more complete skeletons of Ichthyosaurs were discovered, followed by a complete skeleton of the long-necked Plesiosaurus, the ‘sea-dragon’ in 1823. This was followed by the ‘flying-dragon’ Pterodactylus in 1828 and others.

Mary died from breast cancer, aged 47. For one with such disadvantaged beginnings, she had gained the respect and imagination of scientific and lay public who gave her recognition in her lifetime. Nine years before her death she was given an annuity, or annual payment, raised by members of the British Association for the Advancement of Science and the Geological Society of London. She was the first honorary member of the new Dorset County Museum.

Her death in 1847 was recorded by the Geological Society (which did not admit women until 1904) and her life commemorated by a stained glass window in St Michael’s Parish church in Lyme.