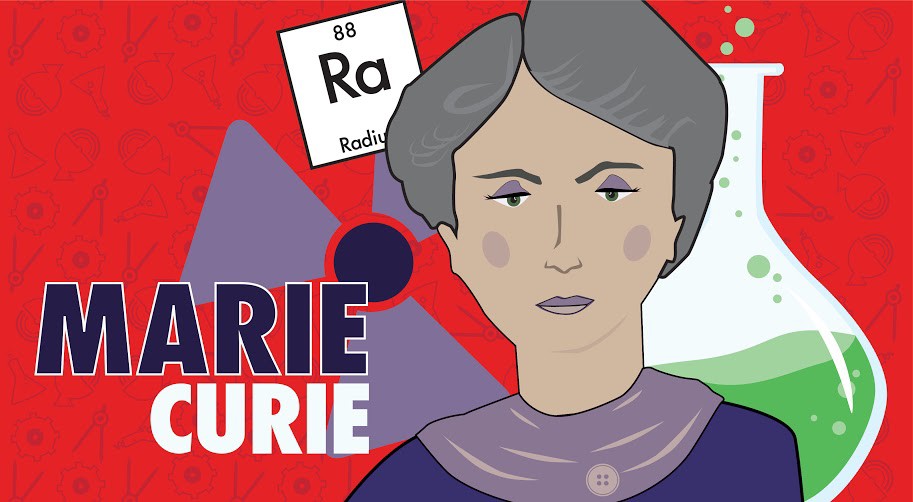 FACT: Not only is Marie Curie the first woman to ever be awarded the Nobel Prize, she is also the only woman to have won it twice, and in two separate sciences (physics and chemistry).

Marie Curie was born Marie Sklodowska in Warsaw, Poland in 1867. A brilliant student, she dreamed of studying at the Sorbonne in Paris. It took eight years of saving before she could afford to go, and despite very poor living conditions, as well as a lack of French she graduated in physics in 1893 and mathematics in 1894.

While searching for a Parisian laboratory to continue her experimentation, she was introduced to Pierre Curie, a highly regarded professor at the School of Physics. At 35 years old, Pierre was already an internationally recognised physicist and though his papers had been well received by distinguished colleagues, he was still an outsider in the French academic community. Like Marie he did not care for outward distinctions or a career. The two married in July 1895.

During her studies Marie had heard about Henri Becquerel’s discovery of a sort of radiation emitting from uranium salts and decided to study these ‘uranium rays’ for her doctoral thesis. She soon discovered that the intensity of the rays was in direct proportion to the amount of uranium in her sample. Nothing she did to the uranium affected the rays. This, she said, ‘shows that radioactivity is an atomic property’. She also found that two minerals, pitchblende and chalcite, were much more radioactive than uranium itself, and realised that they must contain a new radioactive element.

After the exciting results of Marie’s early experiments Pierre abandoned his study of crystals to join her in her search for new substances.

The couple split their work, with Marie carrying out the chemical separations and Pierre taking the measurements. In July 1898, using basic chemical refining methods, they isolated a product from pitchblende about 400 times more active than uranium. They named this ‘polonium’ in honour of Marie’s native Poland.

Marie later recalled that ‘it was exhausting work to move the containers about, to transfer the liquids and to stir for hours at a time, with an iron bar, the boiling material in the cast iron basin’. But they continued with the painstaking refining and by December 1898, the couple announced the discovery of an even more radioactive substance in pitchblende which they called ‘radium’. This discovery had far-reaching effects; opening up the fields of radiotherapy and nuclear medicine.

At a Royal Institution Lecture in London in 1903, Pierre described the amazing properties of radium and the medical tests he had been carrying out on himself. He had tied a piece of radium to his arm for ten hours and then studied the burn-like wound that left a permanent scar. Because of this, Pierre observed the potential of radium in treating cancer.

In 1903 Marie and Pierre Curie were awarded half the Nobel Prize in Physics ‘in recognition of the extraordinary services they have rendered by their joint researches on the radiation phenomena discovered by Professor Henri Becquerel’.

After Pierre was killed in 1906, Marie was left with their two daughters; Irène aged 9 and Eve aged 2. But Marie was determined to continue their work. Not only did she became the first ever woman professor at the Sorbonne, but she also discovered how to isolate radium in metallic form. In 1911 she was awarded the Nobel Prize for Chemistry for the discovery of the elements radium and polonium. This was achieved ‘by the isolation of radium and also from her study of the nature and compounds of this remarkable element’.

During World War I she established a front-line X-ray service in the battlefields of Belgium and France, tirelessly fundraising, training staff and driving the X-ray vans. After the war, along with her research, Marie continued to fundraise, this time for her Institutes and for a hospital and laboratory devoted to radiology.

Marie Curie died in 1934 from the cumulative effects of radiation exposure.

In April 1995 Marie and Pierre Curie’s remains were enshrined in the Pantheon in Paris. Marie Curie is the first woman to be honoured in such a way for her scientific achievements.

The original version of this piece is from the Science Museum.