Ruth Patrick- a Pioneer in Science and Pollution Control Efforts 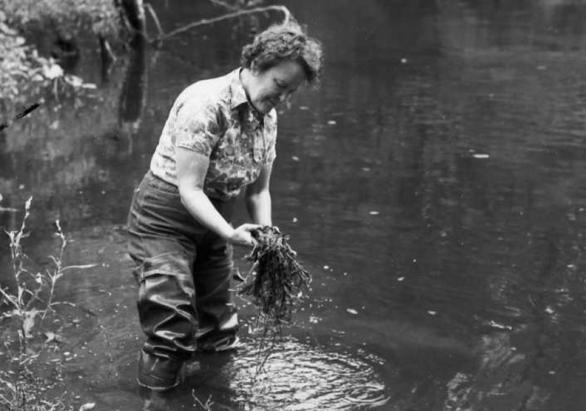 Dr. Ruth Patrick, an adviser to presidents and the recipient of distinguished science awards, was one of the country’s leading experts in the study of freshwater ecosystems, or limnology. She achieved that renown after entering science in the 1930s, when few women were able to do so, and working for the academy for eight years without pay.

“She was worried about and addressing water pollution before the rest of us even thought of focusing on it,” James Gustave Speth, a former dean of the Yale School of Forestry and Environmental Studies, said in an e-mail message.

Dr. Patrick built her career around research on thousands of species of single-cell algae called diatoms, which float at the bottom of the food chain. She showed that measuring the kinds and numbers of diatoms revealed the type and extent of pollution in a body of water. Her method of measurement has been used around the world to help determine water quality.

Dr. Patrick’s studies led to the insight that the number and kinds of species in a body of water — its biological diversity — reflected environmental stresses. That idea became known as the Patrick Principle, a term coined by the conservation biologist Thomas Lovejoy. In an interview, Dr. Lovejoy, of the H. John Heinz III Center for Science, Economics and the Environment in Washington, said the principle can be applied to bigger settings, like an entire ecosystem, and lies at the heart of environmental science.

Ruth Patrick was born in Topeka, Kan., on Nov. 26, 1907. Her father, Frank, a lawyer, had an abiding interest in the natural world and encouraged her interest in science from an early age, taking her and her sister on walks in the woods to collect pieces of nature and putting them in a can, she recalled. He gave her a microscope when she was 7.

“I collected everything: worms, mushrooms, plants, rocks,” Dr. Patrick was quoted by the academy as telling an interviewer in 2004. “I remember the feeling I got when my father would roll back the top of his big desk in the library and roll out the microscope. He would make slides with drops of the water samples we had collected, and I would climb up on his knee and peer in. It was miraculous, looking through a window at a whole other world.”

After graduating from the Sunset Hill School for girls in Kansas City, Mo. (now Pembroke Hill School), Ms. Patrick resisted her mother’s wishes that she marry and learn the social graces and decided to study botany instead. Enrolling at Coker College in Hartsville, S.C., she went on to earn a bachelor’s degree in the subject in 1929 and then a master’s and a doctorate in the same field at the University of Virginia. She received her Ph.D. in 1934.

She began her association with the Academy of Natural Sciences, which had the best collection of diatoms in America, as a graduate student in 1933. In 1937, she became an assistant curator of microscopy, an unpaid position. Only in 1945 was she put on the payroll, and two years later she established the limnology department, now called the Patrick Center for Environmental Research. She was its chairwoman until 1973, when she was named to the Francis Boyer chair of limnology. From 1973 to 1976 she was chairwoman of the academy’s board.

Her breakthrough came in 1948, when she led a study of Conestoga Creek in Lancaster County, Pa., to obtain data on the relationship between diatoms and water quality. The creek was chosen because it suffered from many types of pollution, including sewage, fertilizer runoff, toxic substances and metals from industry.

Her team, including a chemist, a bacteriologist, and animal and plant experts, determined the types of pollutants in sections of the river and then identified the plant and animal species. Dr. Patrick found that some species of diatoms thrived in water that was heavily contaminated with organic material like human sewage, while other flourished among chemical pollution.

Refining this finding, she was able to examine a sample of stream water under a microscope, determine the type and numbers of diatoms present, and tell what kind of pollution was present and how severe it was.

To check the number and types of diatoms, Dr. Patrick invented a device called the diatometer, a plastic box containing microscope slides that when strategically placed in a stream collects the maximum number of the organisms.

More broadly, her results showed that under healthy conditions, many species of organisms representing different groups should be present.

Dr. Patrick believed it essential that government and industry collaborate in curbing pollution and was a consultant to both in developing environmental policy. In 1975, she became the first woman and the first environmentalist to serve on the DuPont Company board of directors; she was also on the board of the Pennsylvania Power and Light Company. She advised President Lyndon B. Johnson on water pollution and President Ronald Reagan on acid rain and served on pollution and water-quality panels at the National Academy of Sciences and the Interior Department, among others.

She was elected to the National Academy of Sciences in 1970 and received the National Medal of Science from President Bill Clinton in 1996. In 1975, she received the $150,000 John and Alice Tyler Ecology Award, then the world’s richest prize for scientific achievement.

Dr. Patrick lived for many years in the Chestnut Hill neighborhood of Philadelphia. Her first husband, Charles Hodge IV, whom she married in 1931, died in 1985. Her second husband, Lewis H. Van Dusen Jr., died in 2004. She is survived by a son, Charles Hodge V, and several stepchildren and grandchildren.


An earlier version of this obituary contained an outdated job title for the conservation biologist Thomas Lovejoy. He is still with the H. John Heinz III Center for Science, Economics and the Environment, but he is no longer the center’s president.

This profile originally appeared in The New York Times following Ruth Patrick's death in September 2013 at the age of 105.