The first woman to design an airplane 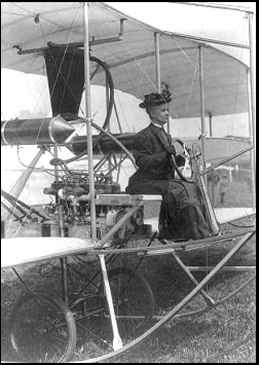 The name E. Lilian Todd isn’t one with which most of us are familiar, but we should be. Miss Todd is recognized as the first woman to design and build an airplane, though she herself never flew it.

A self-taught inventor with a love of mechanics, Todd co-patented a typewriter copy-holder in 1896, before becoming interested in aeuronautics in the early 1900s. After seeing airships in London and sketches of airplanes in a Parisian magazine, Todd exhibited her first design at Madison Square Garden in 1906, gaining national attention.

With the patronage of philanthropist Olivia Sage, Todd was able to begin work on her plane in 1908. Determined to fly it herself, she applied for permission in 1909, but was denied. And so on November 7, 1910 Miss Todd’s plane, piloted by Didier Massson, flew for 20 feet over the Garden City aviation field near Mineola, Long Island, New York.

For a truly wonderful re-imagining of Miss Todd’s plane’s first flight, this short film by Kristina Yee is definitely worth watching!

The Early Aviators website has more information on E. Lilian Todd and other aviation pioneers.