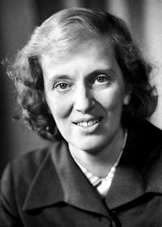 This week for #ThrowbackThursday, we're looking at Dorothy Hodgkin (1910-1994). She was a leader in the field of X-ray crystallography, winning the 1964 Nobel Prize in Chemistry for solving the structures of penicillin and vitamin B12. Five years later, she was also the first to solve the complex structure of the insulin molecule.

When she won the Nobel Prize, newspaper articles made sure to note how the "affable-looking housewife Mrs Hodgkin" had been awarded "for a thoroughly unhousewifely skill: the structure of crystals of great chemical interest," with headlines such as "Oxford housewife wins Nobel" and "British woman wins Nobel Prize – £18,750 prize to mother of three."

Dr. Hodgkin was a pioneer in more ways than one – in 1938, just 10 years after universal suffrage arrived in the United Kingdom, she made waves by presenting a paper at the Royal Society whilst 8 months pregnant "as if it were the most natural thing in the world."

Her work paved the way for future discoveries in chemistry, medicine, and pharmacology, and her fierce determination helped blaze a trail for many women scientists to follow.

To learn more about Dorothy Crowfoot Hodgkin, read her profile on the Nobel Prize website.