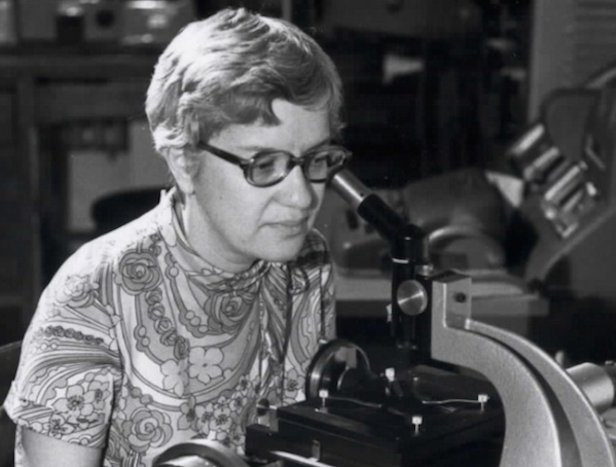 At age ten, Vera Rubin was fascinated by the stars, as she watched the night sky revolve from her north-facing bedroom in Washington D.C. Although her father was dubious about the career opportunities in astronomy, he supported her interest by helping her build her own telescope and going with her to amateur astronomers’ meetings. She got a scholarship to the prestigious women’s college Vassar, where she graduated as the only astronomy major in 1948. Applying to graduate schools, Rubin was told that “Princeton does not accept women” in the astronomy program. (That policy was not abandoned until 1975.) Undaunted, Rubin applied to Cornell, where she studied physics under Philip Morrison, Richard Feynman, and Hans Bethe. She then went on to Georgetown University, where she earned her Ph.D. in 1954 (under George Gamow, who was nearby at George Washington University).

After teaching for a few years at Georgetown, she took a research position at the Carnegie Institution in Washington, which had a modest astronomy program. Her work focused on observations of the dynamics of galaxies. She teamed up with Kent Ford, an astronomer who had developed an extremely sensitive spectrometer.

Rubin and Ford used the spectrometer to spread out the spectrum of light coming from the stars in different parts of spiral galaxies. The stars in the disk of a galaxy move in roughly circular orbits around the center. If the disk is inclined to our line of sight, the stars on one side approach us while those on the other side move away. When a source of light moves toward us, we see a decrease in the wavelengths of the light (a shift toward the blue end of the spectrum), and when the source moves away, we see an increase in the wavelengths (a shift toward the red end). This is called the Doppler effect, and the wavelength shift is proportional to the speed of the light source relative to the observer. Rubin and Ford made careful measurements of Doppler shifts across the disks of several galaxies. They could then calculate the orbital speeds of the stars in different parts of those galaxies.

Because the core region of a spiral galaxy has the highest concentration of visible stars, astronomers assumed that most of the mass and hence gravity of a galaxy would also be concentrated toward its center. In that case, the farther a star is from the center, the slower its expected orbital speed. Similarly, in our solar system, the outer planets move more slowlyaround the Sun than the inner ones. By observing how the orbital speed of stars depends on their distance from the center of a galaxy, astronomers, in principle, could calculate how the mass is distributed throughout the galaxy.

When Rubin and Ford began making Doppler observations of the orbital speeds in spiral galaxies, they immediately discovered something entirely unexpected. The stars far from the centers of galaxies, in the sparsely populated outer regions, were moving just as fast as those closer in. This was odd, because the visible mass of a galaxy does not have enough gravity to hold such rapidly moving stars in orbit. It followed that there had to be a tremendous amount of unseen matter in the outer regions of galaxies where the visible stars are relatively few. Rubin and Ford went on to study some sixty spiral galaxies and always found the same thing. “What you see in a spiral galaxy,” Rubin concluded, “is not what you get.”

Her calculations showed that galaxies must contain about ten times as much “dark” mass as can be accounted for by the visible stars. In short, at least ninety percent of the mass in galaxies, and therefore in the observable universe, is invisible and unidentified. Then Rubin remembered something she learned as a graduate student about earlier evidence for unseen mass in the universe. In 1933, Fritz Zwicky had analyzed the Doppler velocities of whole galaxies within the Coma cluster. He found that the individual galaxies within the cluster are moving so fast that they would escape if the cluster were held together only by the gravity of its visible mass. Since the cluster shows no signs of flying apart, it must contain a preponderance of “dark matter”—about ten times more than the visible matter—to bind it together. Zwicky’s conclusion was correct, but his colleagues had been skeptical. Rubin realized that she had discovered compelling evidence for Zwicky’s dark matter. Most of the mass of the universe is indeed hidden from our view.

Many astronomers were initially reluctant to accept this conclusion. But the observations were so unambiguous and the interpretation so straightforward that they soon realized Rubin had to be right. The luminous stars are only the visible tracers of a much larger mass that makes up a galaxy. The stars occupy only the inner regions of an enormous spherical “halo” of unseen dark matter that comprises most of a galaxy’s mass. Perhaps there are even major accumulations of dark matter in the vast spaces between galaxies, without any visible stars to trace their presence. But if so, they would be very difficult to observe.

And just what is this “dark matter,” so far unobserved except by the effect of its gravity on the stars? The question is one of the major unsolved mysteries of astronomy today. Many theoretical and observational astronomers are hard at work trying to answer it.

Vera Rubin continues to explore the galaxies. In 1992, she discovered a galaxy (NGC 4550) in which half the stars in the disk are orbiting in one direction and half in the opposite direction, with both systems intermingled! Perhaps this resulted from the merging of two galaxies rotating in opposite directions. Rubin has since found several other cases of similarly bizarre behavior. More recently, she and her colleagues found that half the galaxies in the great Virgo cluster show signs of disturbances due to close gravitational encounters with other galaxies.

In recognition of her achievements, Vera Rubin was elected to the National Academy of Sciences and in 1993 was awarded the National Medal of Science. But throughout her career, Rubin has not sought status or acclaim. Rather, her goal has been the personal satisfaction of scientific discovery. “We have peered into a new world,” she wrote, “and have seen that it is more mysterious and more complex than we had imagined. Still more mysteries of the universe remain hidden. Their discovery awaits the adventurous scientists of the future. I like it this way.”

This is an excerpt from COSMIC HORIZONS: ASTRONOMY AT THE CUTTING EDGE, edited by Steven Soter and Neil deGrasse Tyson, a publication of the New Press. © 2000 American Museum of Natural History. To order the book, call 1-800-233-4830, or go to http://www.amnh.org/education/resources/rfl/web/buybook/